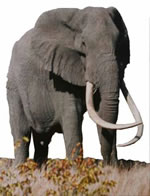 Origin of Name: The “Shawu Bull” was named after the Shawu valley (Vlei) in which he spent much of his life.
Range: Shawu moved over a large range which spanned the flat Mopani covered plains country between the Letaba and Shingwedzi rivers and stretched from the main road to Lebombo Hills. He did not however, cover this enormous area regularly, but drifted around slowly, taking about 6 months to move from South to North.
Special Features: Shawu’s tusks are the longest on record in the Kruger National Park and one of the 6th longest to ever come out of Africa.
General: Shawu was a fairly approachable animal and showed no particular fear or distrust of vehicles. He was a large bull having a shoulder height of 340cm. Due to the pincer formed by his large tusks he was sometimes referred to in Afrikaans as “Groot Haaktand”. In 1981 it was decided to fit Shawu with a collar as poaching was a constant threat from Mozambique, this was done successfully and he was monitored on a regular basis.

Shawu died of old age in the Kostini area east of Shingwedzi, near the northern watershed of the Shawu Valley (Vlei) in October 1982. He had been ill for some time and his condition and movements were monitored daily towards the end of his life by means of a radio transmitter which had been fitted in a collar around his neck. He was close to 60 years old when he died.
(Shawu’s tusks are on display in the Letaba Elephant Hall)