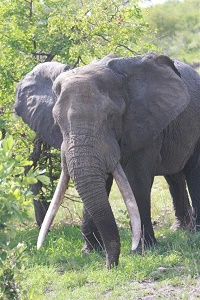 Origin of Name: ‘Matlakusa’ from tlakusa, is Tsonga meaning to ‘raise, lift up’, this is a large open pan and bore-hole, alongside the eastern border, southeast of Malonga in the Kruger National Park and links to this bull’s large home range.
Range: Northern and Far Northern KNP.
Special Features: This bull’s ivory closely resembles that of Xindzulundzulu, that it is fairly symmetrical, straight and widely splayed with a shallow curve from a side profile. The left ear holds the defining characteristics that separate these two bulls, there is a R5.00 sized hole in the tip of the lobe as well as an area of damaged cartilage at the top give a large v-shaped ‘collapse’ in the ear. A very small u-shaped notch and two R0.20 holes are visible on the middle of the lobe but only at close inspection and with the ears extended. The right earlobe had a R0.50 sized hole towards the bottom of the lobe that has recently been torn and is now a u-shaped notch with a small hole towards the inner lobe above this. Other than this the lobe is fairly clean edged. A small protrusion of skin is visible on the trunk at the top adjacent the left tusk. Visible from a side profile is a growth on the left foreleg behind the leg just above the joint.
General: Initial images of this bull from Joël and Di Roerig were identified as Xindzulundzulu due to his ivory shape. Later in 2014 a full series of images submitted by Julio de Castro between Shingwedzi and Balalala created a dilemma as at the time as Xindzulundulu was known to only be local to Shingwedzi and a new bull was suspected. Additional images by regular contributor Frans van Achterbergh submitted showing his left and right side allowed the defining characteristic’s to be seen and to be able to determine that there were in fact two separate bulls. This revelation allowed two previous sightings one of which was by Ian & Deirdre Outram and the other by Forum member Lion Queen both in 2012 that were both previously thought to be Xindzulundzulu but could not be confirmed as the locations did not make sense and defining characteristics in these images were not very clear. However the receipt of the 2014 submission with clearer images could confirm these identifications. Several other images placed with Xindzulundzulu’s monitoring file could now also be separated out as being those of Matlakusa and in 2015/6 it was decided that sightings of him were sufficient to name the bull confirming his status.