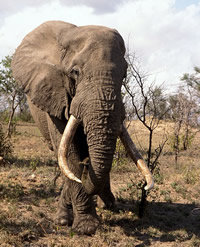 Origin of Name: This bull was named by Dr Ian Whyte in memory of “Mambrrr” – Philemon Chauke who was a Research Assistant for many years in the Kruger National Park based in Skukuza. (The origin of his name is obscure, but it is believed to come from a locally brewed South African beverage made from peaches known as “mampoer”. The name should be pronounced with a prominent roll of the rrr’s so as to resemble an elephant greeting rumble.)
Range: Tshokwane/Skukuza area (Salitjie near the Nwatindlopfu drift).
Special Features: Small hole and notch in left ear towards the centre of the edge of the lobe, notable tear in the right ear lobe at the bottom of the ear, leaving a small flap of ear close to the body, two small v-shaped notches slightly above the tear. Mambrrr had curved tusks, largely symmetrical, with the left tusk slightly thinner, longer and more curved then the right tusk.
General: This elephant was originally photographed at Leeupan by Dave Jeffery on Wednesday 6th October 2004 and also by Louise Rademan and Tony Swemmer on 19th September 2005 along the Salitje road near the Nwatindlopfu drift. Mambrrr was thought to be a relatively young bull when he was discovered dead on the 30/3/07, and it was thought he had the potential to develop into one of Kruger’s more impressive bulls.

In discussion with vet Johan Marais, the indication was that the right molar in the upper jaw could have been lost as the result of a fight being dislodged by another bull or by the formation of an abscess which could have forced the tooth out. This would have made eating extremely difficult for this bull and could have contributed to the untimely death and starvation of this bull.

(Due to this bull being a named tusker, Steven Whitfield preserved the skull of this bull for possible future use in displays. The skull is currently at Tshokwane rangers post.)